I am a Runner 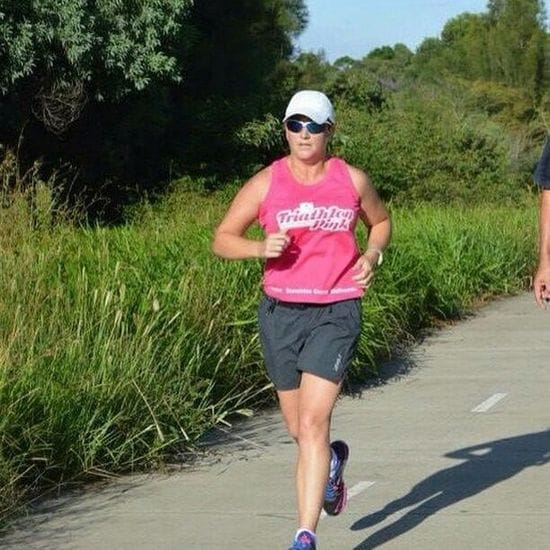 With the Gold Coast Airport Marathon and City2Surf just around the corner, we asked Skin Strong Ambassador Megan to share her running experience.

If you're needing a push to lace up and hit the road, or want to improve your run performance, keep reading for great advice on overcoming challenge and enjoying the freedom of running!

Back when I was a youth I always entered into my school's cross country events and I always did alright. Never first place but always second or third and off to zone. However, once I hit high school it all stopped.

I was an active person throughout my teens and twenties, always swimming and riding bike, despite being diagnosed with Rheumatoid. But things got a little more serious in my mid-twenties when I purchased my first road bike. I loved swimming and riding and it was my way of keeping fit.  Six weeks after having my second daughter I decided to enter a short distance "try a tri" triathlon.  The run leg was a very short - 3km and despite having some fitness from swimming and riding, I couldn't even make it the whole way. That is when I decided "Right if I'm going to do triathlons, I have to learn to run".  So I started with the good old walk/run plan.  Running 1km almost killed me but I kept pushing on.

Every time I went for a run I would try and increase the distance of my run and then walk the rest.  For example, run 1.5km then walk the 500m, then run again for as far as I could, usually by that stage only 1km, then walk again. I tried to run/walk at least 2 times a week.  I slowly built my running up and before I knew it I was running non-stop for 3kms. I kept running this distance for a few weeks about 3 times a week. Once I felt like it was getting easier I would add on another 500 metres each run. Before I knew it I was up to the 5km mark, parkrun ready! So I took myself off to Parramatta Parkrun and ran like I'd never run before. 5km done in 30min 20secs. I was beyond stoked. It probably took me approximately 3 months from walk/run to running 5kms and a pace which I was pretty proud of.

Soon after that I realised a friend of mine was a runner and she convinced me to come running with her.  I was so nervous but thought hey, I need to push myself and do this!  Yes I was slow and she was always in front of me by a good distance but if it wasn't for my running buddy I would never have increased my pace and distances.

Having rheumatoid and being a bit overweight in the beginning I would never have thought I could run 5km, or 10km, or a half marathon or a full marathon.  But this Mum of two with rheumatoid is now a runner.  It has taken me a long time to call myself this.  I wouldn't say I am a fast runner but I run and that's the important thing.

My fastest 5km was back in 2015, at 26m55s. 10km was 58m again back in 2015.  I haven't been able to get back to those times lately and certainly need some motivation but I will get there again.  My fastest half marathon was 2hr10min and my one and only marathon (so far) was 5hr14m.  I think back to 2012 when I couldn't run 1km and if someone would have said to me one day you will run a marathon, I would have laughed at them and told them they were dreaming.  But I did. Me, the girl who wasn't a runner.  So if I can do it then so can you.

You'll get the bug and then you'll be a runner!