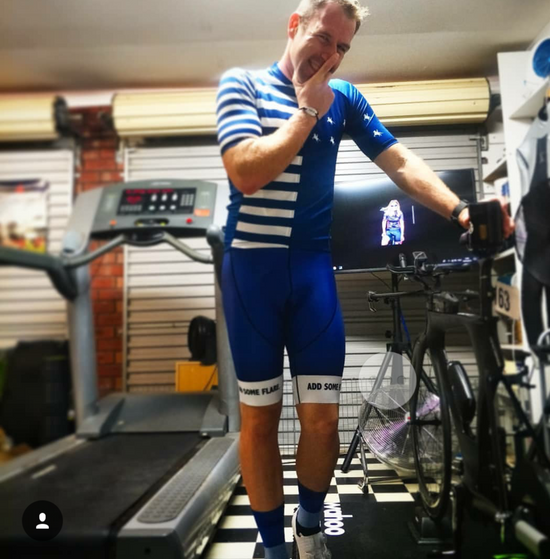 Do you take the time to thoroughly review your race?  Try to work out where things could have been smoother or faster and to celebrate the wins out on the course?

Ben Shepherd is someone who does!  If you follow him across on instagram (if you don't, you should - shep_just_shep) you'll know that Ben is very diligent in his approach to racing and after not the best race at Robina (Qld Tri Series) he was back at it in Canberra this last weekend...

After licking the wounds from Robina, I sat down and had a good hard look at the positives to come out of that race and compared them to the huge lessons learned. Whilst the heat knocked me around significantly, it is unfair to blame everything on that I also made a few huge rookie errors, most significantly letting myself get frustrated by situations that were out of my control. I wanted to approach this race in a different mindset quietly confident in both my abilities and the training that I had completed under the watchful eye of the master coach, Mark Turner from Tri Nation.

I checked into the Capital three days out from the event, this time with my wife and baby girl one of which is not sleeping very well at the moment (you can make up your mind which one). Annie the ever logical one in our marriage convinced me to make an executive decision to put them both up in a hotel nearer transition for the night before the race so that I could get some sleep. It turned out to be a huge win-win, as I got a full night's sleep and woke up feeling refreshed (a very uncommon feeling), whereas Annie and Bella got a night away from a moody, introspective, carb loading triathlete! It was a great call on Annie's behalf, one that I will always be grateful to her for.

Race morning came and went the 0425 alarm was nowhere near as brutal as I thought it would be. I went through the prerace rituals with comfort and precision, even managing to finish my coffee before cruising out the door. My playlist of choice was quite unusual, listening to classical music and acoustic rock, trying to keep the heart rate low.

I was amongst the first into transition, and as I listened to my music whilst going through my prerace checks, I found myself truly enjoying the experience and embracing the nerves something I had never done before. When my girls joined me and I got a hug from both of them, my morning was complete. This was the first qualifying race they had been to watch, and I was no longer racing just for my shot at the World Championships I was racing to make them proud of me.

I headed to the swim start with my family, enjoying the company (whilst Bella enjoyed all the doggies), and with my warmup complete, I was finally ready to enter through the gates of hell for yet another time. I knew what I had to do, it was all about the execution.

The swim turned out to be wetsuit-optional, and like every other athlete, I jumped at the chance. Being the last wave in a 2-lap swim has both pros and cons, and the lake very quickly turned into a washing machine. The plan was simple go hard, but not to the point that I couldn't function on the bike. When the gun went off, I found feet straight away, and fists, and knees, and everything else. The field very quickly thinned out however, and soon enough I was in semi-clear water. I settled into a rhythm, and in all honesty I couldn't tell how quick my swim was during as the water was so murky that I couldn't see past my bicep (which is really not that big in all fairness). I pushed hard, and tried to stick to the faster swimmers' feet as well as possible. The second lap was just as rough as the first as we found ourselves overtaking some of the slower swimmers from the wave in front, but still I persisted and eventually found myself scrambling up into T1 with a swim time of 24:19 which isn't too bad considering my garmin measured 1650 odd metres (which resulted in an average pace of 1:28/100m not too bad for an adult onset swimmer like myself.)

Bike - The Fast and the Furious 9

The bike course was simply amazing. Leaving T1 I was confronted with a wide, flat, smooth road with only a few gradual hills thrown in for good measure. I felt strong and fresh out of the swim so decided to get amongst it early as I had some places to make up. I knew that I needed to save some energy for the run, so I kept that in the back of my mind throughout. IN all honesty, there was not much to say about the bike split the work that I have been doing with Mark clearly paid off as I found myself a lot more comfortable throughout whilst maintaining a higher power output. The marshals were extremely hot on drafting which was really positive after the last race, and whilst there was a lot of leapfrogging out on the course, I kept my cool and didn't let the testosterone get the better of me. The girls were extremely vocal out there too which was such an incredible boost for the morale as the course slogged on! I managed to stomp out my bike split in a 59:16, giving an average pace of over 40km/h a massive improvement over previous results. One of the major negatives for me was my rear brake rubbing when I was out of the saddle. Based on the course this was only out of the turnarounds, and I managed to have the forethought to 'release' my brake once finished cornering which solved the problem and limited the damage. I entered T2 feeling positive but slightly nervous about what the run would bring...

Negatives:
Need to be speedier out of T1
Could do with more power
Attention to detail regarding bike brakes could have cost me in the long run

The run was an interesting beast. Very wary of going out too hard like I did in Robina, I harnessed my nervous energy into good run form and quick cadence. I found myself stride for stride alongside another competitor who I assumed was not in my age group due to his number being so different to mine. We were comfortably holding 3:45/km, and started to push each other a little bit. It became a very interesting battle as we started ticking off the kilometres together. We started passing athlete after athlete, neither one of us breaking stride. At the 5th kilometre, he started to make a bit of a lead, almost 10m, however I managed to reign it back in. The second lap was even more brutal than the first, and we were still locked together. The pain started to kick in at about the 7th kilometre, and the only thing that got me through was knowing that I was less than 12 minutes away from finishing I had no idea what place I was in my age group, but I was seriously hoping for top 10. The pace remained constant, every now and then blowing out to a 3:53/3:54/km, but then surging again. Still, I paced with old mate as we were now racing for pride. At 200m to go, he dropped the hammer and kicked away up the hill and over the finish line to pip me by 10 seconds. That one hurt I simply couldn't put it away in the sprint. Then, I found out that it we were both in the 30-34 AG... And he had claimed second. Ouch. But still, I put it all out there today, my run ended up at 37:51 and I have no complaints. My pace was constant all day, and I raced smart yet hard, especially in the run.

I honestly think I could have given a little bit more
Not putting my competitor away earlier
Losing the damn sprint!!

This race was a very different experience to the last. I went in nervous yet positive, and whilst I had goals, my overall aim was to be proud of my efforts. I can honestly say I did that today, and I laid it all out there. The support I had from Annie and Bella was incredible, and I was truly thrilled to be out there. Once again, I have to thank all my amazing sponsors for their support I couldn't do it without you, and I honestly love using your products. To the supercoach Mark, you're an absolute legend we did this as a team, boss, and the guidance you have provided has been amazing. Finally, to my beautiful wife Annie and our gorgeous daughter Bella, I have dragged them halfway across the country for a race. Annie was an absolute warrior throughout this trip, and she honestly kept me centred and grounded throughout none of this would be possible without her.

Oh, and in case you were wondering my final result was 2:05:03, third in the AG and 65 seconds behind the winner. Based on my calculations, I now have two thirds and a fourth in the bag for my top three results... I'm going to WORLDS!!!! See you in September, Gold Coast!

Skin Strong is delighted to be one of Ben's Sponsors!

Go your Distance with Skin Strong